Cookies help us deliver our services. By using our services, you agree to our use of cookies.
OK
Learn more
Learn more about cookies
OK
Home
Discover
The history of Lille 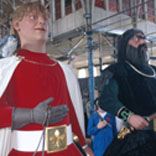 In the year 620, Salvaert, a Burgundian Prince, escaped from an insurrection and fled to England with his wife Ermengaert and an escort of loyal servants. As he was crossing the bleak woods of Bois-sans-Mercy, he fell into an ambush laid by Phinaert, a bandit lord whose den, the castle of the Buc, towered above the banks of the River Deûle. Ermengaert, who had escaped the slaughter, found refuge in the forest. As she lay asleep at the foot of a willow by a fountain, she was blessed with an apparition of the Virgin Mary. The Virgin predicted to her the birth of a son who would avenge his father. Ermengaert gave birth to a child named Lydéric, who was taken in by a hermit. The child was fed by a doe. Ermengaert was imprisoned by Phinaert. Twenty years later, Lydéric challenged Phinaert to single combat. This judicial duel took place in Pont-de-Fins before the King of France. Phinaert was defeated and the King gave to Lydéric the castle of Buc, the cradle of the city of Lille, and granted him the title of first Prince of Flanders. Ermengaert was set free…

The origins of Lille


The name « L’Isle » first appeared in 1066, in the charter of a donation to the collegiate church of St Peter by Baudoin V, Count of Flanders, who owned a castle on one of the islands in the Deûle River.

The town developed around this castle and around a port which existed on the site of the present Avenue du Peuple Belge.

The development of the business connections between the Netherlands, Flanders and fairs of Champagne was essential for Lille, developing an axis of North-South traffic, which contrasted totally with the ancient Roman way (Boulogne-Arras-Bavay-Cologne).

During this period, the city was organised around the forum, the market square (now called the Grand Place) and the castrum (now Old Lille). The castrum was a fortified urban centre, enclosed by protective watercourses. It included the castle mound (demolished during the construction of the “Cathédrale Notre-Dame de la Treille”) and the Residence of the Counts of Flanders, known by the name of « Palais de la Salle », which is no longer in existence. 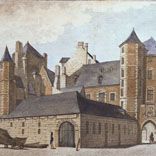 The counts of Flanders

In the 13th century, Lille and Flander were the object of a permanent greedy quarrel between the Counts of Flander and kings of France.

In 1205 Count Baudoin IX, crowned Emperor of Constantinople during a crusade, died leaving two daughters, Jeanne and Marguerite. The young heiresses were raised by the King of France Philippe Auguste ; Jeanne, the oldest daughter, was married to Ferrand of Portugal and the couple was then sent to Lille.

Although a French vassal, Flanders was linked, economically, with England and the Holy Roman Empire. To ward off Philippe Auguste’s claims on the northern regions, a coalition against the French king was formed which included the counts of Boulogne, Hainaut and Flanders, King John of England and the Holy Roman Emperor, Otto IV. The battle of Bouvines concluded this war on 27th July, 1214. Ferrand was imprisoned in the Louvre, while Jeanne governed Lille. It was during this period that numerous charitable foundations were created by the Countess Jeanne throughout the region. In Lille the Hospice Comtesse was founded ; it is now a museum of Flemish art.

The dukes of Burgundy

In 1363 the marriage of Marguerite of Flanders to Philip the Bold made Flanders part of the duchy of Burgundy.

Lille along, with Brussels and Dijon, became one of the capitals of the Burgundian state. The presence of the dukes stimulated trade. Philip the Good (1419-1467) built the Rihour Palace (now seat of the Tourist Information Office) where he made the “Pheasant Vow” in 1454 promising to leave for the Crusades. This episode was drawn by the great painter Jean Van Eyck. 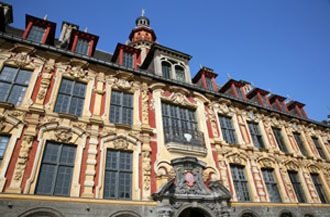 The marriage of Marie of Burgundy, daughter of Charles the Bold, to Maximilian of Austria in 1477 brought the duchy of Burgundy, including Flanders, under Habsburg control. The duchy later became Spanish when Charles V of Spain became emperor.

The King of Spain named his daughter Isabelle ruler of Flander. This was the beginning of the period called the “Golden Century” for Lille. Numerous convents were founded and the city had two successive expansions, from 1605 to 1606 and from 1618 to 1621. In 1652, Julien Destrée, master builder of the city, built the Stock Exchange in a style which could be qualified today as Flemish Renaissance. 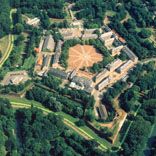 Following his marriage to Maria-Theresa of Spain in 1663, Louis XIV laid claim to the Low Countries, taking advantage of the rights of his wife to a part of Spain’s heritage. On 17th August 1667 he personally directed the siege of Lille and triumphantly entered the city after only 15 days of resistance, after which Lille became the capital of the Northern Provinces. The Sun King hastened to have a citadel built by Vauban and enlarged the town, laying down regulations on the height and style of the houses (rang du Beauregard 1687). In September 1792, 35 000 Austrians laid siege to Lille which was defended by only a small garrison. Cannonballs rained down on the town and many buildings were destroyed ; nevertheless, the courageous inhabitants held on and the Austrians eventually lifted the siege. The statue of the Goddess, built in 1845, commemorates this episode.

Lille during the 19th century

The development of Lille in 1858 corresponds to the industrial development of the Second Empire. The city annexed the towns of Wazemmes, Esquermes, Moulins and Fives.
Forty kilometres of streets were laid and twenty two squares were constructed, as the population had more than doubled. Numerous institutions were built, such as the Prefecture, the Fine Arts Museum and the public and Catholic universities.
But this period was also for Lille a period of strong industrialization which marked the urban tissue of certain districts. 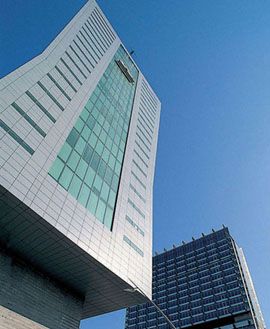 With a population of almost 220 000 inhabitants, thanks to the recent addition of the town of Lomme, Lille claims its place as the tenth largest city and fourth largest metropolis (1.9 million inhabitants including 700 000 over the Belgian border) in France. With 36 % of the population aged under 25, Lille is a vibrant, young and dynamic city.

In 2004, Lille was European Capital of Culture and obtained the title of “City of Art and History”. The city has hence underlined its status as an excellent destination for culture and tourism. The Euralille centre, with its TGV (High Speed Train) station, Congress venue (Lille Grand Palais), offices, hotels and a casino, confirms the position of the Lille area on the European map of tourism and trade events.
Theme:
Text:
Booking online
> Availability updated in real-time
> A secure credit card transaction
> No additional costs
> Personalized advice